Rosacea (rose-AY-sha) is a common skin disease that causes redness and swelling on the face. 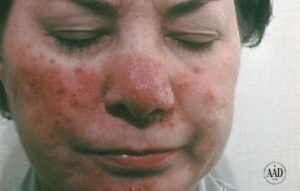 Often referred to as “adult acne,” rosacea may begin as a tendency to flush or blush easily, and progress to persistent redness in the center of the face that may gradually involve the cheeks, forehead, chin, and nose. It also may involve the ears, chest and back. As the disease progresses, small blood vessels and tiny pimples begin to appear on and around the reddened area; however, unlike acne, there are no blackheads.

When it first develops, rosacea may come and go on its own. When the skin doesn’t return to its normal color and when other symptoms, such as pimples and enlarged blood vessels, become visible, it’s best to seek advice from a dermatologist. The condition rarely reverses itself and may last for years. It can become worse without treatment.

HOW TO RECOGNIZE ROSACEA?

Pimples of rosacea appear on the face as small, red bumps, some of which may contain pus. These may be accompanied by the development of many tiny blood vessels on the surface of the skin and persistent redness of the face.

In more advanced cases of rosacea, a condition called rhinophyma (ryno-fi-ma) may develop. The oil glands enlarge causing a bulbous, enlarged red nose and puffy cheeks. Thick bumps can develop on the lower half of the nose and nearby cheeks. Rhinophyma occurs less commonly in women.

About 50% of people with rosacea have eye involvement. Some rosacea patients experience burning and grittiness of the eyes – a condition known as conjunctivitis. If this condition is not treated, it can lead to even more serious complications for the eyes.

WHO IS AT RISK FOR ROSACEA?

Those most likely to develop rosacea are fair-skinned adults, especially women, between the ages of 30 and 50, although it may affect men or women of any age and even children. For some unknown reason, women get rosacea more often than men, and some cases of this disorder have been associated with menopause. Rosacea usually develops over a long period of time. It may first seem like a tendency to blush easily, a ruddy complexion, or an extreme sensitivity to cosmetics. An occasional embarrassment or a tense moment may also trigger flushing.

DO’S AND DONT’S FOR ROSACEA PATIENTS

The exact cause of rosacea is still unknown. The best prevention may be to avoid things that make the face red or flushed.

Many people with rosacea are unfamiliar with it and do not recognize it in its early stages. Identifying the disease is the first step to controlling it. Self-diagnosis and treatment are not recommended, as some over-the-counter skin applications may make the problem worse.

Dermatologists often recommend a combination of treatments tailored to the individual patient. Together, these treatments can stop the progress of rosacea and sometimes reverse it.

The key to successful management of rosacea is early diagnosis and treatment. It is also important to follow all of your dermatologist’s instructions. Rosacea can be treated and controlled if medical advice is sought in the early stages. If left untreated, rosacea will worsen and may be more difficult to treat.

Letters to the Editor