In the United States the incidence of malignant melanoma is increasing at an alarming pace.

For people born in 1930, the risk of developing malignant melanoma at some point in their lives was then 1:1500. A baby born today has a lifetime risk of 1:55.

It is now possible to predict with considerable accuracy which malignant melanomas are curable and which are not. Thickness of the tumor is a key factor. Malignant melanomas that are removed when they are less than 3/4 of a millimeter in thickness are cured in virtually all cases, as long-term follow-up has repeatedly confirmed. However, progressively thicker malignant melanomas have correspondingly poorer prognoses.

Given these facts, it is essential that members of the medical profession, the allied health fields, and the public at large be able to recognize early (thin) malignant melanomas, which can be so successfully treated. At Treasure Coast Dermatology, Dr. Ioannides is trained in recognizing and treating these types of skin cancers. 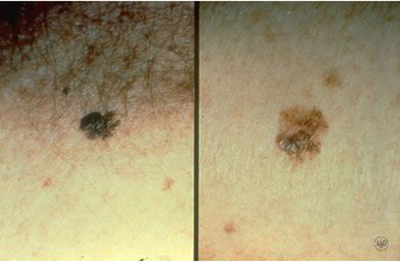 Any one or more of these changes occurring in a new or existing pigmented (tan, brown) area of the skin, or in a mole, may indicate the presence of a malignant melanoma:

In general, the risk of developing malignant melanoma increases as people grow older. In addition, individuals living in the Sun Belt (i.e., closer to the equator) are at greater risk. Caucasians are affected ten times more often than other ethnicities.

Beyond these general considerations, several specific factors identify individuals prone to develop this tumor. People at high risk are those who have:

Letters to the Editor